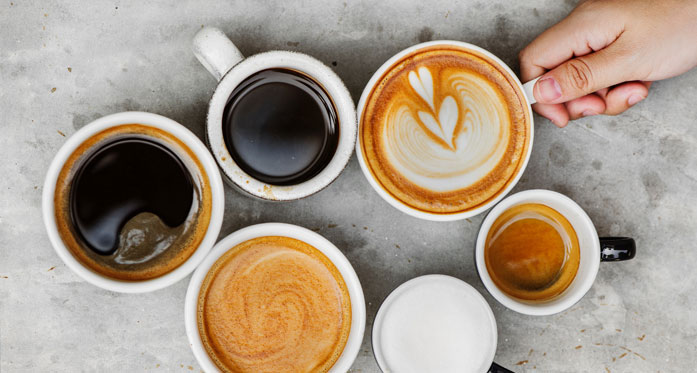 If you haven’t noticed already, Spain is a big coffee-drinking country. It’s not uncommon to have coffee with just about every meal of the day (of their 5 meals!)

Typical office hours in Valencia will include a “coffee break” or almuerzo around 10:30 or 11 in the morning, where you will see people with their snack between breakfast and lunch, accompanied by a coffee of course!

You might have heard of the “café con leche” before, but since there are so many different types of coffee to order in Spain we’re providing a few of the most common types of coffee you’ll find on the menu in Spain. Take a short coffee break (or almuerzo) like the locals in a café, and try something new!

Café Solo: Similar to Italian Espresso, but cheaper and you might find it a bit stronger!

Café Cortado: A café solo with just a bit of milk. It’s served in a small cup, just like the café solo.

Café con Leche: One of the most popular coffees in Spain, café con leche combines a shot of espresso with the rest of the cup filled with coffee, and is served in a normal coffee cup.

Café del Tiempo: A café solo with two or three ice cubes and a lemon slice, it’s normally served with the coffee separate from the glass with the ice and lemon This type of coffee is very common in the Valencian Community and is usually served during the warmer seasons, although you can find it all year round.

Carajillo: This is one of the most traditional ways of having a coffee in Spain. In the Valencian region you might hear it called “Cremaet” (which means “burnt” in Valencian). Carajillo combines coffee with flamed liquor (brandy, whisky, anisette or rum) and a lemon peel. According to folklore, its origin dates to the times when Cuba was a Spanish colony. The troops combined coffee with rum to give them “coraje” (courage) and from there, “corajillo” and more recently “carajillo”.

Why not join Valencia's New Year celebrations to welcome in 2020? Here are a few…

Update: All the latest from Valencia