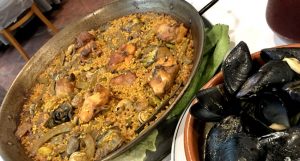 If you’ve ever been to Spain or looked up anything about Spain, you’ve most likely already heard of paella!

Paella is by far the most famous dish in Valencia, and it has become one of the most representative symbols of Spanish gastronomy! Paella is only authentic to this region as it was born in the rice fields of Albufera. A typical paella in Valencia will include rice, chicken, rabbit, green beans, “garrofón” (a large white bean), paprika, saffron, chopped tomatoes, olive oil, salt and water. Paella is traditionally cooked on wood (from the local orange trees) over an open stove outside using a «paella», the giant pan used to cook it. Seafood paella has also become very popular, and you can even find vegetable paella, mixed paella, and more variations.

A popular dish among fisherman in the past, arroz a banda (rice apart) is a typical dish from the Alicante province of the Valencian Community. This dish is made up of two parts,  a fish stew and a rice dish (made using the fish broth). In arroz a banda is made up of: rice (of course), cuttlefish, prawns, different types of fish, chopped tomatoes, saffron, paprika, olive oil, salt and “alioli” (Valencian for oil and garlic).

Specifically from Gandía, fideuá is another traditional fishermen’s dish among the Valencian Community. Fideuá is also served in a large pan like paella, and similar to arroz a la banda since it’s made with seafood. This dish, however, is made with a type of noodle instead of rice. Its main ingredients are: short skinny noodles, fish (different types), calamari, cuttlefish, lobster, mussels, or prawns.

Arroz al Horno (baked rice) is a dry rice dish, normally cooked in a clay pot in the oven. Its main ingredients are: rice (again!), pork fat and ribs, black sausages, chorizo (sometimes), chickpeas, potatoes, tomato, garlic, saffron, olive oil and salt. It is very common in Xátiva, but made in homes all throughout the Valencian region.