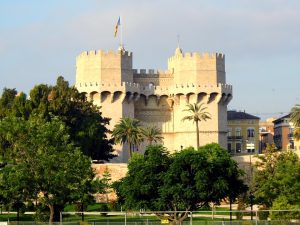 If you are new to the city or you haven’t been here long, then you won’t know that October 9th is a big day in the Valencian region! Two (completely unrelated) local holidays fall on this day and the Valencians don’t seem to fall short of celebrating either one of them!

Just like any Spanish holiday celebrated here, October 9th will have a mascleta to end the celebrations and plenty of traditional clothing can be seen throughout the day.

The first and most traditional holiday that falls on October 9th is the Valencian Community Day, or Nou D’Octubre as the Valencians call it, is an important holidays for this region as it is basically their local version of Independence Day. The name of the holiday literally means 9th of October in Valencian and it represents the Reconquista; when the Christians took back control of Valencia after 500 years of Moorish rule. October 9th is the actual day King Jaime I of Aragon captured the city in 1238- and so this day is celebrated in memory of this historical moment.

There are many events which take place in the days leading up to the holiday and on the actual day itself. On October 7th, two days before the holiday, you can see a live reenactment of the surrender of the Moors to King Jaime I and the Christians. This takes place at the Serranos Towers.

On October 9th, there is a concert at Palau de la Musica and fireworks in Turia Park. The Senyera, which is the original flag of the Valencian Community, is brought across the city to Plaza de la Virgen on this day and given as a flower offering to King Jaime I. To find out more about what’s going on in the city today click here!

The second holiday which takes place on October 9th is also a special day in the Valencian Community for another, completely separate reason! The Day of Saint Dionysius (Sant Dionís) is Valencian’s version of Valentine’s Day, since Saint Dionís is the saint of lovers. Lovers celebrate with a traditional gift given on this day known as a Mocaorà, which is a silk scarf wrapped around sweet marzipan treats.

To find out more about Valencian holidays, festivities and cultural celebrations, take a look at our Blog.